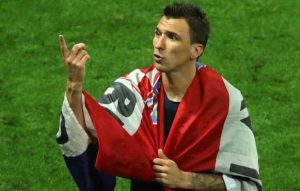 Former Bayern, Juventus and Atletico star  has hung up his boots following a decorated 17-year spell at the top

Mario Mandzukic has announced his retirement from football at the age of 35,

bringing the curtain down on a glittering career.

The striker, a former all-time great Croatia international and a World Cup runner-up at Russia 2018,

was most recently with AC Milan across the second half of the 2020-21 season.

But now, the prolific attacker – who won top-flight titles in four different countries,

plus Champions League glory with Bayern – has confirmed that he has hung up his boots in a message to fans.

Mandzukic took to Instagram on Friday afternoon to announce his decision, penning a letter to his younger self.

• Man Utd Pleased As Cristiano Ronaldo Has Been Granted An Early Release From International Duty,

“While wearing these […], your first in life, you can’t even imagine what you will achieve in football.

“In the jersey of your greatest pride, the Croatian national team,

you will write some of the most important moments of Croatian sport.

You will succeed because you will have a lot of people on your way to help you.

“Teammates you will fight with, coaches you will learn from, fans who will support you and family,

managers and friends who will always be with you. You will be forever grateful to all of them!

Having made his senior debut in his home country with Marsonia across the 2004-05 campaign,

Mandzukic made his name initially with Dinamo Zagreb, across a three-year spell,

that saw him score a hat-trick of Croatian league titles.

A move to Wolfsburg followed, which proved the springboard for a subsequent swap to Bayern Munich,

where he further burnished his reputation across a superb treble-winning season in 2012-13,

including a goal in the club’s Champions League final victory over Borussia Dortmund.

A lone season with Atletico Madrid followed before he headed to Serie A with Juventus,

where he won his third different league crown as the Bianconeri walked through Serie A in four consecutive seasons.

where he won his final honour – before he concluded his career with a spell at Milan this year.

most famously netting the winner to send his nation through in the Russia 2018 semi-final,

against England, before getting himself on the scoresheet in ultimate defeat to France in the final..