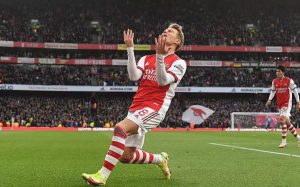 Martin Odegaard has not enjoyed the best of seasons at Arsenal so far, and he has taken the surprising decision of deleting his Twitter account.

The 22-year-old has received some criticism online and, when asked about his decision to come off of Twitter, he explained that social media does more harm than good.

Odegaard was once viewed at Real Madrid as being one of the brightest stars of the future.

Making his official debut for the club aged 16 and becoming the youngest debutant in the club’s history.

Since then, he has spent spells on loan at Vitesse, Real Sociedad and Arsenal.

But since returning to the Gunners on a permanent basis, he hasn’t hit the ground running like he did when on loan.

Odegaard explained to TV2 in Norway:

It was really because I never used it and had no need for it.”

“I never used it and had no need for it. I think a lot of sh*t in general is on there.

I have no need to be on it. I probably did not have a Twitter update for a long time, then I thought there was no point in having it, so then I just deleted it.”

Odegaard  positive message to the youth after deleting his Twitter account, urging them not to get hooked to their devices.