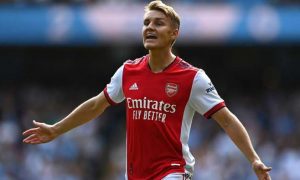 The Norway international is aiming to reverse Arsenal’s fortunes,

with both the Champions League and the Premier League in his sights.

The Norway international made a permanent move to north London this summer,

following a successful loan spell from Real Madrid last term, and has signed a four-year deal.

“To get the club up the table, to the top of the league and to fight for European football,”

“For this season, obviously we want to get back to European football and then,

hopefully with time, win trophies, the Champions League and hopefully win the Premier League within a couple of years.

“That’s how it should be at this club, that’s the standard.”

Odegaard will hope to have a crucial impact on turning those fortunes around however,

following his arrival from Santiago Bernabeu.

Arsenal will be at home to host Norwich City on Saturday Arteta side are hoping for first goal of the season as well first win.