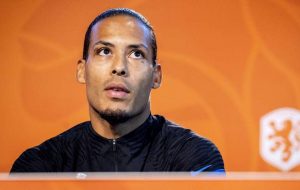 The Red’s main man at the back went down late in his country’s win over Turkey after a heavy collision.

Virgil van Dijk has looked to calm any injury fears after a collision late in Netherlands’ 6-1 win over Turkey on Tuesday.

The defender was sent into the air after a clash with Halil Dervisoglu following an,

under-hit pass from Dutch goalkeeper Justin Bijlow, which led to a late consolation for the Turks.

Van Dijk was down on the ground for a brief spell as Netherlands easily won the World Cup qualifier in Amsterdam.

Read Also: Unstoppable Haaland Continues His Fine Form With A Hat-Trick As Norway Dismantle Gibraltar By 5-1

“I’m fine, luckily. I’m already over it. Maybe because I am so big,

they think I am acting, because when I go down, it goes in quite a slow way.”

Netherlands and Liverpool supporters will be keenly following the defender’s health this season,

after he missed nearly all of the 2020-21 season with an anterior cruciate ligament injury.

The injury played a major role in Liverpool’s inability to defend the Premier League title they won in the 2019-20 campaign.

Van Dijk also missed out for Netherlands at Euro 2020 this summer,

as the Dutch fell to the Czech Republic in the last 16.