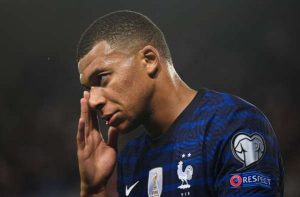 an injury while on international duty, the French Football Federation (FFF) confirmed on Thursday.

The striker played almost all of his nation’s 1-1 draw with Bosnia & Herzegovina before being taken off in injury time.

But subsequent examinations revealed he had suffered a calf problem,

and will not be available for Les Bleus’ next World Cup qualifiers.

On Wednesday in Strasbourg, at the end of the match against Bosnia-Herzegovina (1-1),

Kylian Mbappe felt a pain in his right calf which does not allow him to participate in the next two matches of the French team,

in Ukraine on Saturday and against Finland in Lyon-Décines next Tuesday,

” the FFF announced in a statement published on the federation’s official website.

“The Paris-SG striker has been made available to his club.

He will leave the group in the evening and will not be replaced for the trip to Ukraine.”

Now PSG will hope that, having secured his presence for at least another season,

the calf injury will not affect the forward’s availability once the international break comes to an end.

The French side are back in action in Ligue 1 on September 11, when they host Clermont at Parc des Princes.

And four days after that clash Mauricio Pochettino’s men begin their Champions League quest away to Club Brugge.

despite failing to win in their latest outing, and would further cement their grip on the,

summit with victory over Ukraine, their nearest challengers on four points.