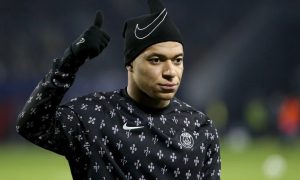 Kylian Mbappe has revealed that those expecting him to join Real Madrid will have to wait.

The French man revealed his intention to leave PSG for Real over the summer, but the two heavyweight clubs failed to agree a fee even though Mbappe is now heading into the final stages of his contract.

Though Real appeared willing to stump over €200m for a player who will be available for nothing – technically speaking, if you don’t include his extortionate wages – in just over six months time.

It’s always appeared unlikely that Los Blancos would resurrect their interest in Mbappe during the January transfer window, particularly as they are on course to achieve their goal of winning La Liga, as well as making good progress in the Champions League.

Now, a move – in January at least – can categorically be ruled out, after Mbappe told CNN in an extended sit-down interview that he won’t be leaving PSG before the end of 2021/22.

In fact, a calm and relaxed Mbappe revealed his love for Paris as a city, the football club and the supporters, and revealed his ambitions for the rest of the campaign – ambitions that include beating Real Madrid when the two meet in the last 16 of the Champions League in February.

Read Also: Mbappe: I Don’t Look Back, My Only Goal Is To Keep Winning

“No, not me in January, no” Mbappe laughed when asked if Carlo Ancelotti was referring to him in regards to transfer movement.

I will give everything I have to win the Champions League, the league and the cup, and to give all the pleasure to the fans because they deserve it.

I think I deserve to win something great with PSG.”

Pressed on why he previously revealed his ambition to join Real,

“I was honest. I gave a feeling, I gave what I have in my heart.

“I think nobody can say something bad about it because it’s a feeling, it’s personal.

Of course I’m happy to stay [to play with Messi], it’s my city [Paris} too. I’m French… I want to win everything this season.”

On the upcoming Champions League clash with Real and whether PSG are ready, Mbappe simply said: “We have to be ready. It’s time.

“We play six months to adapt to the new player of the team, to see what can be good what can be not good, but now we have to go and be ready to play.

“It’s the most important part of the season. Of course, we want to step up now. It’s been two years we do final, semifinal, but now we want to win.”

Obviously, Mbappe stopped short of ruling out a move in the summer – and it remains likely that he’ll be upping sticks and moving to Madrid once his PSG deal runs out, fulfilling a lifelong dream to represent the club who are the most successful on the continental stage.