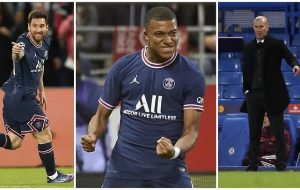 Kylian Mbappe future will become clear in the near future, especially as he is permitted to speak to other clubs about a summer transfer as of January 1. That’s because the French forward’s Paris Saint-Germain contract will expire on June 30, 2022.

PSG still want to sign him to a new contract and Parisian fans and media hope this will happen too.

Right now, they are looking for any development that suggests Mbappe will stay, including the potential arrival of Zinedine Zidane as the new coach at the Parc des Princes.

It’s no secret that Mbappe admires Zidane, however the coach’s arrival wouldn’t influence his decision.

Just as Lionel Messi’s signing in the summer didn’t stop Mbappe from wanting to leave.

Something he told club directors and then later made clear in interviews, Zidane coming into the dugout wouldn’t necessarily convince the 22-year-old that he should renew.

His desire to move on from PSG is about more than the environment at the capital city club. It’s about sporting ambition.

Real Madrid are still confident of a ‘yes’ from Mbappe

After failing to convince PSG during the summer, even when making an offer of 180 million euros.

Real Madrid are now biding their time and waiting for January 1, when they’ll be permitted to speak with the player.

The Spanish club’s directors remain confident of landing Mbappe and of receiving the green light from the forward.