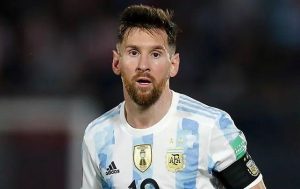 Argentina have officially qualified for the 2022 World Cup, with a draw against Brazil combined with Chile’s 2-0 defeat to Ecuador being enough to book their place in Qatar,

Former Barcelona star Lionel Messi has agreed with the national team that he will focus on Paris Saint-Germain in the coming months.

Despite having acquiesced to Messi’s desire to prioritise the Argentine national team during the process of signing him to a contract.

Members of PSG’s backroom staff, most notably sporting director Leonardo, have grown frustrated at that, with the Brazilian even going as far as speaking publicly on his irritations.

The issue came to a head before the current international break when Messi visited Madrid for regenerative therapy.

Where he missed two matches against RB Leipzig and Bordeaux.

But them was immediately available to play for Argentina in the aforementioned qualifying matches.

With qualification guaranteed though, Argentina still have four matches left to play in their group.

And it is now being seriously considered that Messi won’t be called up for any of them.

Messi believes it’s right for him to give PSG more time with the World Cup place now secure.

Especially with the forward having played more minutes internationally than domestically thus far in 2021/22.

PSG and the Argentinian FA have spoken recently to discuss this matter, and they put forward their case as to why it would benefit both parties if Messi was to miss the final four qualifiers.

The next round of qualifying matches are scheduled to take place in January.

We will now wait to see if coach Lionel Scaloni will call on Messi or stick to the agreement in principle that the veteran will not play.

PSG will hope to have a match-fit Messi back in the fold as soon as possible, especially with a pivotal Champions League match against Manchester City coming up in under a week.