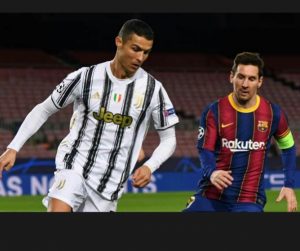 Lionel Messi should head to Serie A and sign for Juventus in order to play alongside Cristiano Ronaldo, James Rodriguez has claimed, adding that it would be a “dream” pairing for football fans.

The Argentine is a free agent after his expected renewal with the Blaugrana failed to materialise, with Paris Saint-Germain thought to be his most likely new destination ahead of Manchester City.

But now Everton star Rodriguez has weighed in stating that the forward should instead switch to Turin and link up with the Colombian’s former Real Madrid team-mate Ronaldo – arguably his only true peer for skill and success in the modern men’s game.

“Messi should go to Juventus and play with Cristiano Ronaldo,” James said on a livestream on Twitch ahead of the Toffees’ final pre-season test against Manchester United.

“It would be a bomb. It’s the dream of many fans to see those two play together.

“Messi managed 30 goals and 30 assists for Barcelona per year at least. Now they will have to look for other players to do that.”

The 30-year-old, himself linked with a move away from Goodison Park after manager Carlo Ancelotti departed to take charge of Madrid once more, also considered the state of La Liga amid a spate of transfers.

Aside from Messi’s Barca exit, long-serving Blancos mainstay Sergio Ramos has also left the club for PSG, while other key faces could be moved on from Camp Nou and Santiago Bernabeu.

“Football has changed a lot, Messi leaving Barcelona confirms that,” James added. “Who would have imagined that he would leave Barcelona or that Sergio Ramos would leave Real Madrid?

“El Clasicos in La Liga are going to be different. Before, the cameras were for Cristiano and Messi. Now people will still watch but it won’t be the same.”

Had Messi renewed with Barcelona, he likely would have faced his old rival Ronaldo in his first game back, with the Blaugrana set to face Juventus in the Joan Gamper Trophy this weekend.

Instead, his next game – and for who – remains firmly up in the air, though PSG appear to be in the driving seat for his services.

The Argentine was previously courted by the French heavyweights, as well as Premier League champions City, before he looked to have locked in an extended stay at Camp Nou.