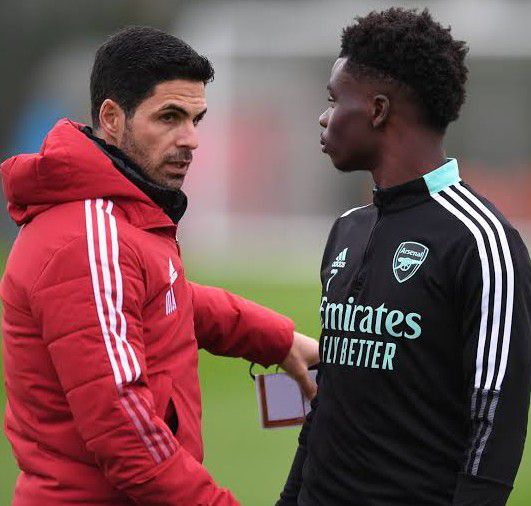 Arsenal boss Mikel Arteta has revealed that it is only a ‘matter of time’ before Bukayo Saka signs a new Arsenal contract.

Saka has emerged as a key player for his boyhood side in recent seasons and enjoyed his best campaign yet last time out.

The England international featured in each of Arsenal’s 38 Premier League games and registered 11 goals and seven assists.

Saka’s current deal is set to expire in 2024 and the Gunners are keen to extend his contract amid interest from the likes of Real Madrid, Manchester City and Liverpool.

Quizzed about Saka’s future on Sunday, Arteta revealed that he was confident that negotiations would be smooth.

“We will try. We both have the same intention. It’s a matter of time.”

Arsenal are indeed pushing Saka hard to sign a new deal, the forward is in no rush to extend terms.

The club are not immediately concerned about his future but would prefer to have a deal sewn up by the end of the summer.

Should this not be possible, negotiations will continue into the 2022/23 season.

Arteta was speaking after his side’s pre-season victory over Everton in Baltimore on Sunday.

Saka performed well in the fixture, latching onto Gabriel Jesus‘ clever pass to score his side’s second goal in a 2-0 win.

Arsenal’s pre-season preparations ramp up over the coming days with friendlies against Orlando City, Chelsea and Sevilla ahead of their Premier League opener against Crystal Palace on Friday 5 August.