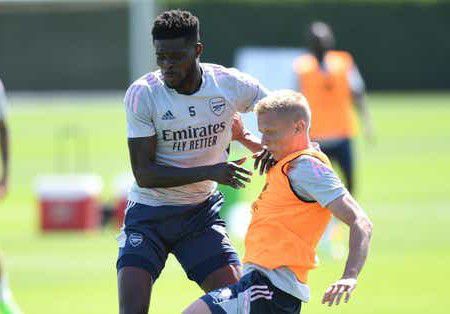 Arsenal manager Mikel Arteta is not confident that Oleksandr Zinchenko and Thomas Partey will be back for Wednesday’s match against Aston Villa.

The pair missed Saturday’s win over Fulham due to injury, with Partey struggling with a thigh issue and Zinchenko a knee problem.

Arsenal are continuing to assess the duo and Arteta believes Partey’s thigh injury is similar to the one that forced him to miss the last six weeks of last season, although hopefully not as severe.

Read Also: The List Of Transfers That Could Happen Between Now And September 1

Zinchenko, meanwhile, was at Emirates Stadium on Saturday in a knee brace yet he was still able to run down the touchline to celebrate Gabriel’s late winner.

Asked on Saturday if Partey or Zinchenko had a chance of playing against Aston Villa, Arteta said:

“I don’t think so. We still have to make another scan, especially on Thomas but I don’t think they will be available.

Asked if Partey’s injury was similar to last season, Arteta added: “[It’s a] similar area, hopefully not as bad.”

Mohamed Elneny will miss Wednesday’s game with a hamstring issue.

In the absence of Partey and Zinchenko, Arsenal beat Fulham 2-1 on Saturday to stay top of the Premier League with a 100 per cent record after four games.

Captain Martin Odegaard was the standout performer, with Arteta noticing a change in him since he got the armband this summer.

“He’s more humble I would say – even more,” he said. “At 23 he has already had a lot of experience and a lot of pressure, especially individually.

“He’s played for [Real] Madrid and knows what it’s about. He does it all natural, nothing worries him, and he’s developing that even more.”