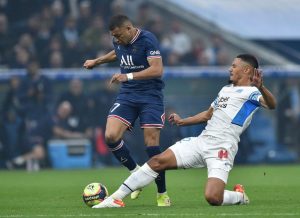 Mikel Arteta has confirmed there were representatives from Arsenal to witness William Saliba’s heroics against Paris Saint-Germain.

Saliba put on a defensive masterclass last weekend as Marseille held the French giants to a goalless draw.

The centre-back was brilliant from start to finish but his highlight was a splendid last-ditch challenge on Kylian Mbappe to deny the World Cup winner a clear effort on goal.

Speaking after the match,

“It was the best match of my career. It was a very, very good game… W

have a few regrets but we’ve still come back with a solid point, it’s not that bad.

“We lack some efficiency. We gave a good account of ourselves.

But, we fought until the end, and because of the atmosphere it was the most beautiful match of my career.”

Saliba joined the Gunners in 2019 but is yet to make a competitive appearance for them.

The 21-year-old is enjoying a good loan spell at Marseille, however, it’s not clear whether he’s part of Arteta’s long-term plans.

But the Arsenal boss refused to rule out seeing Saliba in the squad next season.

As he revealed technical director Edu and chief analyst Ben Knapper were in attendance at the Orange Velodrome.

Arteta said ahead of Arsenal’s  clash against Leicester:

“I think there is room [for Saliba in the squad].

It will depend on what happens with other players and that’s not a conversation to have now.”

“As a club we are always in touch. Edu and Ben were there to watch him and keep a close eye on the progress he’s making.”