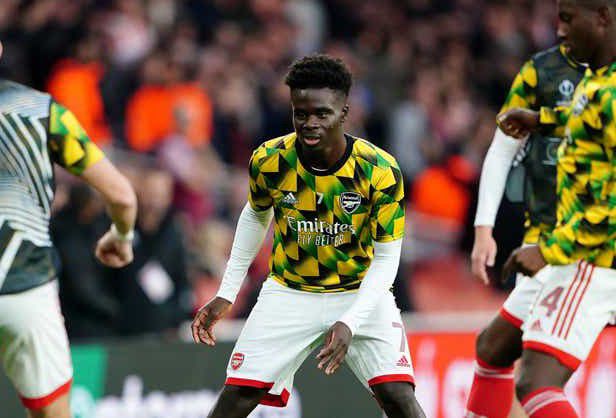 Bukayo Saka pick up injury in the win over PSV but Arsenal boss confirmed the England winger got a kick.

Bukayo Saka played almost the full 90 minutes as the Gunners secured their place in the Europa League knockout stages, thanks to Granit Xhaka’s goal in a 1-0 win at the Emirates Stadium.

The England forward had missed just 179 minutes of club football this season before the game.

He appeared to have picked up a knock midthrough the second half after firing a shot wide.

Saka was visibly limping for a number of minutes, but watched on has both Eddie Nketiah and Gabriel Jesus were substituted before him.

“Yeah he got a kick, he was limping a little bit, but hopefully he will be all right.”

With the World Cup kicking off in two months, Saka’s form and fitness will continue to be closely monitored by England supporters.

The 21-year-old has scored five goals in his 14 appearances so far this season and Arteta insists he has no qualms in playing Saka at every opportunity.

“Look at the top players in the world, they play 70 matches, every three days and make the difference and win the game.”

“You want to be at the top, you have to be able to do that.

And if we start to put something different in the mind of a young player, I think we are making a huge mistake because then [he would] be like ‘no, I don’t play now, on astroturf I don’t play’.

“I don’t want that. I want them to be ruthless every three days. I want them knocking on my door (saying) ‘I want to play, I want to win the game’.

“There is no fitness coach in the world that is going to tell me that they cannot do it, because I’ve seen it.

72 games and scored 50 goals. The players that score 50 goals do not play 38 games in the season, it’s just impossible.”