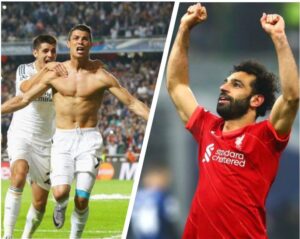 Mohamed Salah has become one of the best players in the world over the past few seasons, but he is yet to match the peak form of Cristiano Ronaldo.

The Egyptian King  was on the score sheet again on Wednesday night against Inter Milan in his side’s 2-0 win at the San Siro.

Roberto Firmino opened the scoring for Jurgen Klopp’s men in the 75th minute when he nodded home Andrew Robertson’s corner.

Then Salah doubled Liverpool ’s lead eight minutes later when his snap-shot wrongfooted Samir Handanovic and gave Klopp’s side an almighty advantage before their home leg on the 8th of March.

Salah’s goal means that he has scored in his last eight away days in the Champions League, which is an impressive feat.

However, Cristiano Ronaldo currently holds the record for most successive away goals, scoring in 12 consecutive away days whilst playing for Real Madrid.

Salah won’t be able to break the said record this season as there simply is not enough matches left in the competition,

though even if he isn’t able to bag in his next four appearances then his current away-goal streak remains extraordinary.

The 29-year-old has quickly become a legend at Anfield, and former Reds star

Jamie Carragher believes that the Egypt international will have a lasting legacy at the club no matter when he decides to leave.

“He will rest alongside Dalglish, Gerrard, Rush, John Barnes, Souness – he will be up there with the absolute greats.

“He is in Liverpool’s all-time eleven on the right-wing, that’s his.

And he is one of the top five or six players to ever play for Liverpool Football Club.

“His goal scoring record is out of this world.

He has won the Golden Boot virtually every year since he has been in the country.”

Salah has scored an unbelievable 149 goals in 232 appearances since returning to the Premier League having disappointed at Chelsea earlier in his career.

That shows the impact he’s had. He is one of the all-time greats in the Premier League, no doubt.”

With Salah being so highly thought of at Merseyside, the former Roma star will be hoping his career at Liverpool doesn’t end on a sour note.

Talks between his representatives and the Reds have been going on for months now,

with the exciting forward now in the last 18 months of his contract – expiring in the summer of 2023.

Salah has made it publicly clear that he would like to remain at Liverpool,

though rumours have circulated though there has not been an agreement made on what the player should earn at the club.

It remains to be seen how the situation pans out at Anfield and whether Salah will be able to break Ronaldo’s record whilst still at the club.