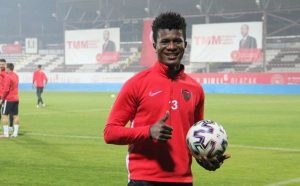 Mohammed Kamara has announced his retirement from the Liberia national team without playing a single game.

This decision comes in the wake of his unceremonious exit from the Lone Star’s camp a few hours,

before the West Africans bowed 2-0 to Gernot Rohr’s Super Eagles at the Teslim Balogun Stadium.

In a social media post attributed to the player by the Liberia Football Association,

Kamara quit, however, he promised to keep supporting the squad because of his friends

‘’Heard that everyone wanna hear my side of the story.

I won’t throw anyone under the bus.

In my years as a professional and college student, I’ve learned that respect is a two-way street,”

‘’You just don’t demand respect.Rather you have to earn it.

After years of turning down the invitation, I blame no one but myself for coming here.

‘’I can promise you all that will never happen like ever again.

It’s officially a wrap! I will be watching and cheering you guys from afar because most of you are my friends.’’

Explaining why the Turkey-based player left without permission,

Englishman Butler claimed Kamara must have been upset by his decision to exclude him from the starting XI.

I called him and chased him to join the Lone Star squad on many occasions,

and we managed to get him,” B

said during a live chat on the Liberia Football Association Facebook page.

“When he joined the team; I had a chat with him, and everything seemed okay.

“We had training sessions and a few members of staff and I felt he wasn’t ready to be focused,

but I was ready to give him the benefit of the doubt.

“And unfortunately, after I did the team talk prior to the game [against Nigeria],

the player in question absconded from the camp because he wasn’t in the starting line-up.

very unprofessional and with no explanation whatsoever.

“So, we moved on and drew a line and life moves on and we’re spotting more players to play for the Lone Star.”

Liberia bounced back from their loss to Nigeria to defeat the Central African Republic 1-0 on Monday evening.