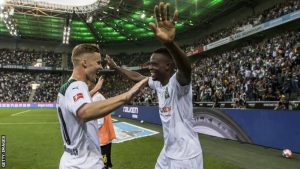 Marco Rose’s return to his former club ended in disappointment as Denis Zakaria scored the only goal.

The Switzerland midfielder played a one-two with Matthias Ginter before firing past,

Gregor Kobel after a rebound from Jude Bellingham.

Three minutes later, Mahmoud Dahoud was sent off for a second yellow.

Read Also: Atalanta End Inter Milan’s 18-game Winning Run At Home In Serie A As They Settled With A 2-2 Draw

Dortmund struggled in front of goal and didn’t have a single shot on target.

The result means Dortmund’s run of scoring in consecutive matches in all competitions,

Bayern Munich will finish the weekend three points clear at the top of the Bundesliga after Wolfsburg also lost 3-1 at Hoffenheim.