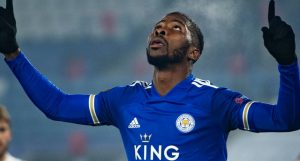 Roma new manager Jose Mourinho has identified Leicester City forward Kelechi Iheanacho as a top transfer target in his bid to return the team to top of the summit.

The Italian giants have not had much luck in their attempts to seal a deal for Chelsea’s Tammy Abraham who has been the club’s primary target and are running out of patience.

Though Chelsea have already agreed to the terms of the transfer in the region of €40m, to be paid in five instalments, the forward remains tempted by Arsenal.

According to Sky Sports, Mourinho, who begins his reign as the manager of the Giallorossi, is already losing patience and has now turned his attention to Iheanacho, whose move is likely to command a large fee having just signed a new three-year Leicester City contract in April.

“Roma are considering making an offer for Kelechi Iheanacho if they fail to sign Tammy Abraham,” Sky Sports wrote on its Twitter handle.

Having struggled in his first two years at The King Power, he has been able to rediscover his form, finding the back of the net 19 times with seven assists in 39 competitive appearances last season as Leicester claimed the FA Cup trophy by beating Chelsea in the final.