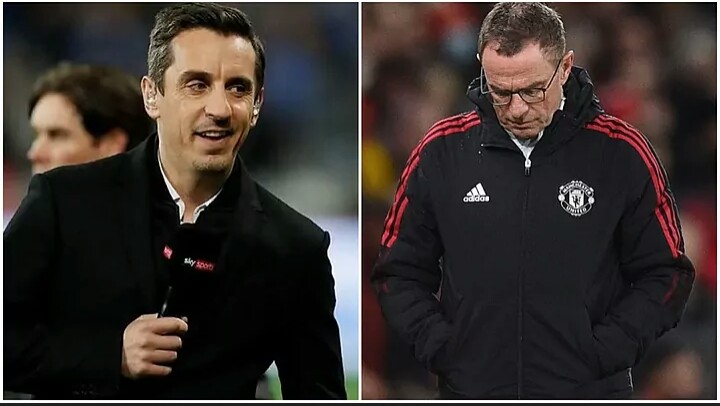 Ralf Rangnick was always intended to be an interim coach for Manchester United, but there was always the suggestion that the German could remain in the dugout if things went well over the second half of the 2021/22 season.

With the team still struggling, though, Gary Neville expects his former club to make a coaching change in the summer.

“I don’t think he gets the job at the end of the season now.”

“I think maybe there was a feeling if United went [up] then that would happen, but it isn’t going to happen.

Manchester United will have a new manager next season.”

The former Manchester United captain does, however, think that Rangnick will be involved in the process to recruit the next permanent manager.

“I think he will because what he has got a real good view of the characters, personalities, performance levels and

training levels of the current group of players, so he is in a strong position to advise.”

“He is probably in the strongest position to advise because he is having day-to-day contact with the players.

“People say he is a sporting director and a coach, but the reality is that his position as a coach is short term.

“His position is assisting the club, constructing their new methodology and structure moving forward is a longer-term position for two years.

I’d rather him get that bit right. He has got good experience around building structures in football clubs and Manchester United do need that.

“The manager has got to be right next season to be able to take on [Thomas] Tuchel, [Pep] Guardiola and [Jurgen] Klopp

because if you don’t take on those three with a manager who can face them like-for-like then you will get beat up.”