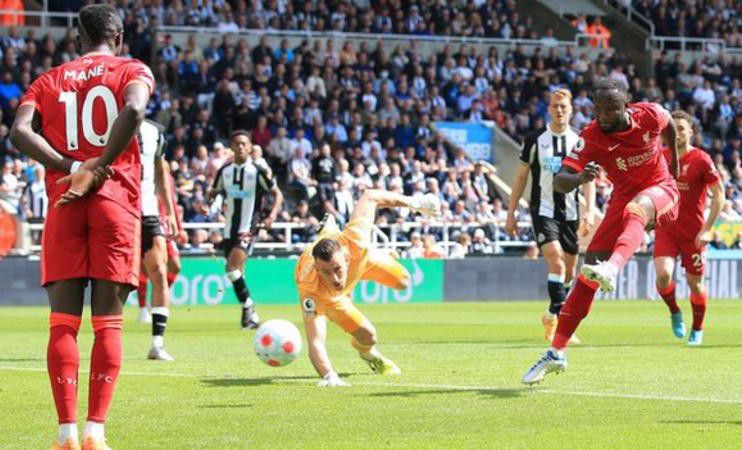 Liverpool kept themselves firmly in the fight for the quadruple as they overcame a spirited Newcastle to move back to the top of the Premier League – for a few hours at least.

Jurgen Klopp made five changes at St James’ Park, including leaving top scorer Mohamed Salah on the bench, after the Champions League semi-final on Wednesday.

It looked like it would backfire as in-form Newcastle started strongly, pressing Liverpool high and forcing them into a couple of early mistakes.

But Liverpool grew into the game and were dominating possession when Naby Keita struck in the 19th minute.

The midfielder showed great composure as he dribbled across the box and past Martin Dubravka before slotting into the net.

Sadio Mane should have made it 2-0 before the break when his shot on the counter was too close to Dubravka, who also made a fine save from a Diogo Jota header.

The Newcastle fans, who were aggrieved that play continued in the lead-up to Liverpool’s goal

because Fabian Schar was down injured, thought Miguel Almiron had equalised after rounding Alisson, only for the effort was ruled out for offside.

The hosts also made a lively start to the second half, although Liverpool went closest to adding a second with Mane shooting wide from close range before Jota’s shot was pushed over.

It was not a vintage Liverpool display, but they got the job done to go two points clear at the top and put the pressure back on Manchester City, who face Leeds at Elland Road at 17:30 BST on Saturday.