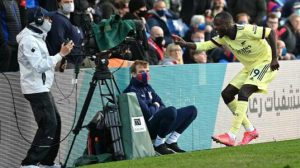 Arsenal are preparing to host Chelsea at Emirate Stadium on Sunday evening in front of their supporters.

Arsenal Winger Nicolas Pepe is full of enthusiastic of return of fans to the Emirates Stadium for their Premier League clash  against Chelsea.

After playing almost all their games behind closed doors last season, Sunday’s London derby will be without restrictions for fans.

The last time Mikel Arteta’s side played at the Emirates Stadium without an attendance limit was a 1-0 win over West Ham United in March 2020 and Pepe explained how their presence inspires the team to deliver positive results.

“Frankly, the difference with an empty stadium is that the match feels a bit dead. You can hear each other on the pitch but it’s the fans that really bring that 12th man. That’s what everyone misses,

“To be honest I played in a lot of empty stadiums before I turned pro, so it didn’t surprise me that much – but there isn’t anything that’s better about playing in an empty stadium than a full one. For me an empty stadium doesn’t have any positives.

“I tried to play the same in an empty stadium as I do when there are fans, but for me when you hear the crowd sing – especially if they call your name – it’s really emotional.

“It shows you the fans really care about you and it makes you really feel part of the club. It pushes you and when you hear them singing your name, it gives you an extra push. It really makes you want to score a goal and return the favour.”

Arsenal are hoping to bounce back from their disappointing opening day loss to Brentford and the Ivory Coast international will aim to open his goal account for the season.

“That was the best atmosphere I’ve played in. We won the game 2-1 and I scored our first goal from a penalty just before half-time,” he said.

“That was the first time I had a laser shone directly in my face, as I was taking the penalty, which wasn’t great! Then the moment I scored they threw bottles and there was beer landing on us and stuff like that. I just thought it was funny!”