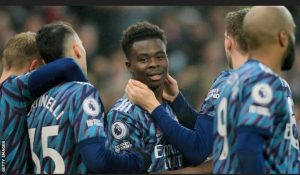 Arsenal secured their fourth Premier League victory in a row as they ran out comfortable winners at Carrow Road and heaped more misery on bottom-of-the-table Norwich.

Bukayo Saka opened the scoring after six minutes when he guided a low shot past Angus Gunn at the end of a slick Arsenal attack.

The impressive Martin Odegaard, who teed up Saka’s opener, then sent Kieran Tierney through to score the away side’s second just before half-time.

The Gunners maintain their six-point lead over fifth-placed Tottenham while Norwich must regroup after a 12th defeat of the season.