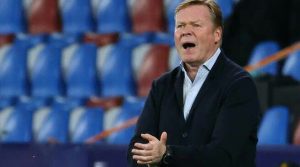 Koeman is expecting the best for the club’s future, despite departure of six-time Ballon d’Or winner.

The Dutch man realistic he would prefer to have Lionel Messi still in his ranks, but he believes that his team’s collective can now come to the fore.

Messi completed a move to Paris Saint-Germain earlier this week following weeks of speculation over his future. Ultimately, he departed when it became evident that the Catalans could not afford to retain him.

READ ALSO: ‘Ronaldo would be dying to be here’ – Di Maria says

My Ankle Injury Is A Thing Of The Past. Says Eden Hazard

The post-Messi era at Barcelona started promisingly, though, with Camp Nou witnessing a 4-2 win over Real Sociedad on Sunday in which Martin Braithwaite struck twice.

Speaking to the media following the victory, Koeman said: “I think our game can be more collective than before, but I’d prefer to have Messi in my team. But if we don’t have the player, it has to be the collective.”

Koeman was asked about several individuals who impressed, and he picked out Memphis Depay, who will be expected to shoulder much of the burden that Messi has left, as an impressive performer.

“He played a great game and he gave a great assist. He’s always doing things,” he said of his compatriot before turning his attention to Braithwate.

“He’s an example of a professional,” Koeman said of the Danish forward. “He always works for the team and has improved his game. He has speed and is difficult to stop. I’m delighted to have a player like him.”

Finally, he offered praise to Gerard Pique, who took a pay cut to allow Memphis and Garcia to be registered for this match.

“He was the leader last year but this season he is better physically,” Koeman said. “His attitude has been exemplary, like that of the other veterans.”

The Blaugrana are next in action on Saturday when they face Athletic Club in their second La Liga match of the season.