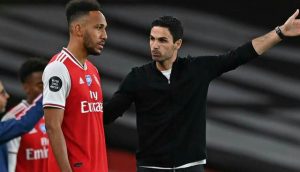 Arsenal are set to begin their league campaign with a trip to the Brentford Community Stadium on Friday night, Mikel Arteta has stated captain Pierre-Emerick Aubameyang is in the right frame of mind for their 2021-22 Premier League opening fixture against Brentford on Friday.

Aubameyang struggled in front of goal last season as the Gunners finished eighth in the league table.

He managed 15 goals in 39 matches across all competitions, including 10 goals in the English top-flight last campaign – his lowest tally having scored 22 league goals each in his previous two full seasons.

During the off-season, the Gabon star enjoyed refreshing family time with trips to Italy, Greece and Silverstone in Northamptonshire where he joined in motor racing.

Aubameyang returned to London Colney after the holiday to join his teammates for pre-season training sessions, but he did not score a goal in any of their last four friendly games (vs. Tottenham Hotspur, Chelsea, Rangers and Hibernian).

Ahead of Friday’s trip to Brentford, Arteta believes the 32-year-old is ready to overcome last season’s struggles.

The Spanish coach said in a press conference: “Since he came back he looked in the right mindset and he’s trying to put last season, which was difficult for everybody and not just for him, for many different reasons, and go back to the level that he can achieve. Because he knows and we know that with his level, this team can achieve much better things.”

Arsenal will not be participating in any European competition this season after their eighth-place finish last term but Arteta pointed out the team’s objective for the season.

“That’s something we must control and we must do, and I think if we’re able to do that, then the results will be the consequence to that.”