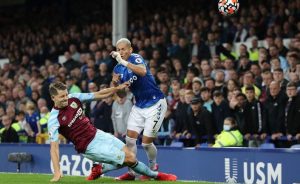 Arsenal looked like a top-four team for large parts of their convincing victory over Aston Villa last Friday.

The tricky part of analysing a true performance level of a team though is to assess the strength of such a form-line.

This Arsenal team aren’t to be trusted just yet as they are packed with inexperience and flaky players like Pierre-Emerick Aubameyang and Alexandre Lacazette.

Who looked motivated to the max against Villa but are also equally likely to throw in a stinker the next week.

But at prices like 7/4 with Sky Bet to win at Leicester, I’m happy to back Arsenal.

I don’t have any trust issues with Arsenal’s defence.

The Aaron Ramsdale, Ben White and Gabriel axis has an impressive look to it.

Leicester not exactly firing in the final third – all their key attacking metrics have them ranked as a mid-table team this season.

There is a case to be made for backing an Arsenal win without them conceding at 4/1 with Sky Bet.

Four of Arsenal’s last five wins on the road have been achieved with a clean sheet and since the start of last season only Liverpool, Manchester City and Chelsea have won more games to nil away from home than Arsenal (8).

Burnley are without a win in 12 Premier League matches stretching across two seasons.

It’s the longest current run without a win in English football.

But there remains absolutely no panic at Turf Moor and if you asked 100 football fans whether they fancied Burnley to get relegated this season,

I’d be surprised if over half of them answered yes.I’d be in that camp, too, and be far more confident backing them to stay up at Evens than backing them for relegation at 5/6 with Sky Bet.

Brentford, despite their newly promoted tag, are a top-10 team according to all the important metrics and were very unfortunate to suffer defeats to Chelsea and Leicester in their last two games. A draw looks the smart play.

I don’t need to tell you how good Liverpool can be but they are easily ignored here at a very skinny 2/9 with Sky Bet when you consider the level of opposition.

The 12/1 for a Brighton win doesn’t float my boat due to their lack of top-six quality in the final third but the draw at over 5/1 with Sky Bet and Brighton with a +2 handicap start at 11/10 certainly have got my punting juices flowing.

In their last 21 games against teams that finished in the top-nine of the Premier League last season, Brighton have only lost three games by more than one goal. Included in that run is a 1-0 win at Anfield and a 1-1 draw with Klopp’s men at the Amex last season.

However, Brighton are a defensively shrewd side capable of keeping the match tight. Since the turn of the year.

Brighton’s expected goals against figure of 30.07 is only bettered by Chelsea and Manchester City ranking them higher than Liverpool and they have kept just as many clean sheets as the Reds (13).

Jurgen Klopp’s men do allow space for the opposition which does normally lead to shots on their goal.

Burnley (9), Crystal Palace (13), Norwich (14) and Brentford (12) have all managed to post numerous attempts on Alisson’s goal this season.

And Brighton have a greater attacking process than those four teams. Sky Bet have dangled a big carrot with 11/8 on offer about Brighton having 10 shots or more.

The Jack Grealish-Joao Cancelo dynamic down Manchester City’s left is quickly becoming a thing of beauty.

They have passed to one another 169 times this season – the most produced by a City combination in the opposition half.

Cancelo’s willingness and intelligence to move inside from full-back whilst Grealish takes two defenders out of the game out wide is almost impossible to defend against – as Brighton found out last weekend.

The pair have yet to link up for a goal but it’s only a matter of time.

Palace’s Joel Ward has a big job on his hands trying to stop these two with the 18/1 with Sky Bet about Cancelo scoring from a Grealish assist worth a small interest in a game where it’s hard to see the away side causing too many problems.

On paper, Chelsea have the best defence in the Premier League with just three goals conceded.

But I will be flabbergasted if that remains the case over the course of the season.

They are offering up good chances and shooting opportunities to the opposition.

A figure of 1.62 expected goals conceded per 90 minutes in their last 10 fixtures showcases that. Southampton created 2.14 worth of expected goals in the 1-1 draw in midweek.

I’ve referenced this before, but it’s still relevant, Chelsea have the biggest difference between goals conceded (3) and expected goals against (10.7) in the Premier League after the opening eight games – at 7.7.

Personally, I’ll be cheering on a home win having invested in the chances of Graeme Jones getting the Newcastle job at 14/1 with Sky Bet.

I’m not confident though. Chelsea have a knack of finding ways to win.

Tough one. Watford were absolutely appalling in the defeat to Liverpool but bright, inventive and deadly against Everton.

It’s hard to know which Watford will turn up.

Meanwhile, Southampton are most certainly a team on the upgrade.

They were excellent in midweek against Chelsea, the better side in fact, backing up their improved results and impressive expected goals metrics in October – only Chelsea, Manchester City and Liverpool have a posted a total combined higher expected goals scored figure this month.

Yet, they remain a team I can’t trust at key moments in matches. I’ll play the draw.

The appointment of card-happy referee Peter Bankes for a meeting between the two teams that have committed the most fouls this season has taken me to the cards market.

Bankes has averaged a whopping 5.1 cards per 90 minutes this season – the highest average of any Premier League referee. With players like Ismaila Sarr, Che Adams and Valentino Livramento all ranking high for fouls won, the 50+ bookings points (10 for a yellow, 25 for a red) looks very solid 11/10 shot with Sky Bet.

That is exactly what good teams do when confidence is low: play for a clean sheet and try to install a bit of belief back within the camp.

I’m convinced it will be the same ‘go and out have a go, lads’ message from the United boss for this intriguing encounter and if Tottenham don’t defend properly, it might just work as United’s power and quality in attack has the ability to win matches.

Tottenham will look to exploit. They have the players to do so too – Harry Kane, despite being nowhere near his best, had more attempts from fast breaks than anyone else last season.

Heung-min Son, Lucas Moura and Tanguy Ndombele are all smart players and will be focused on dominating United in transitions.

I have no evidence to suggest Solskjaer has the tools to stop them.

The home win is fancied, but maybe not five this week eh?

All of Tottenham’s wins in the Premier League (5) under Nuno have come by a one-goal margin, including the opening day victory over Manchester City.

In fixtures like these where Leeds face off against a genuine relegation-threatened outfit, it’s most certainly worth backing them.

Since promotion, in 12 fixtures against teams in the bottom five of the Premier League, Leeds have won nine scoring 24 times in the process.

Plus, with Kalvin Phillips back, Leeds are a different animal.

The England midfielder has missed 13 Premier League games since Leeds returned to the top table and the club have lost nine of those and only just avoided defeat last weekend without him vs Wolves.

And, there is no doubting Norwich’s tag as ‘relegation threatened’ – that might even being a bit kind.

Leeds always give you a chance so Norwich could improve their woeful goals return but the extra quality in the final third for Marcelo Bielsa’s side, spearheaded by Raphinha, should lead them to maximum points.

A repeat of the Arsenal showing here and West Ham, who are a better team than the Gunners according to all known metrics, will roll over Villa.

As David Moyes said after the win over Spurs, he expects them to be challenging for the top-four this season and the performance metrics suggest he’s right to have that lofty target.

Since the start of last season, their haul of 82 points is only bettered by Manchester City, Chelsea, Liverpool and Manchester United.

A statistic backed up by all the expected goals data. West Ham, helped by having arguably the best midfielder in the Premier League on current form in Declan Rice, are among the elite, yet, they are not priced up like it by the markets in games such as this one. The 6/4 for an away win is too big to ignore.

When you mix a defensively focused and motivated Everton with a Wolves team that are struggling to create chances, a low-scoring encounter is on the cards.

The under 2.5 goals angle has been covered by the bookmakers with just 8/13 available, so I’ve gone fishing for a bigger price.