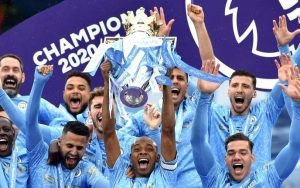 The Premier League has confirmed the dates for the 2022/23 season, which will fit around the Qatar World Cup.

The season will start on August 6 next year, before finishing on 28 May 2023, with all matches in the final round kicking off simultaneously.

There will be a mid-season break between November 14 and December 26 in order to accommodate the tournament in Qatar.

Which will conclude with the World Cup final on December 18.

And one Bank Holiday round – and Match Round 16 over the weekend of 12-13 November will be the last action before the break for the World Cup.

A standalone FA Cup final weekend will be retained and there will be a break for the players between the end of the season and an international break in June.

Premier League clubs have stated their unanimous opposition to FIFA proposals for biennial World Cups and extended international breaks from 2024.

The bosses of the 20 top-flight sides gathered in London on Thursday and the controversial calendar plans drawn up by former Arsenal manager Arsene Wenger were among the items discussed.

The league has opposed the move on the grounds of player welfare, the fan experience, pre-season preparations and the quality of competition.

“The Premier League is committed to preventing any radical changes to the post-2024 FIFA international match calendar that would adversely affect player welfare and threaten the competitiveness, calendar, structures and traditions of domestic football.

“We are open to reforms and new ideas, but they must enhance the complementary balance between domestic and international football in order to improve the game at all levels.

“This process should also involve meaningful agreements with the leagues that provide the foundations for the game.

“We will continue to work with supporter groups, players, domestic and international stakeholders to find solutions that are in the best interests of football’s long-term future.”