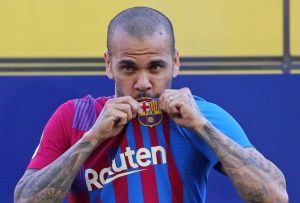 Arsenal, Chelsea, Manchester United and Liverpool have all welcomed former players back with open arms in the past – but it doesn’t always go to plan.

After five-and-a-half years away, Alves is back at Barcelona.

Judging from the early signs, it could be a masterstroke…

It couldn’t have been more beautiful really, could it? Alright, it was only Leeds United in the FA Cup, but after making himself Arsenal’s greatest ever goalscorer in his first spell, Henry returned five years later for just one more embrace with North London.

That image of Henry looking as delirious as the Arsenal supporters after coming off the bench to score a late winner at the Emirates will remain one of the sweetest in the club’s history.

“Going back to Liverpool, I always think to myself, when you’re a young lad and you’ve got a girlfriend, and then all of a sudden you lose her, you always want to go back to her.”

After five years apart, Fowler reunited with his one true love in 2006, when he left Manchester City to rejoin Liverpool.

In his subsequent two years back at Anfield, another dozen goals for the Reds saw Fowler overtake Kenny Dalglish in the list of the club’s all-time top goalscorers.

As far as last kicks for a club go, scoring the winning penalty in the Champions League final is about as good as it gets, and Drogba chose to leave Chelsea on a high after securing the club’s first European Cup in 2012.

Later that year, the striker was named the club’s greatest ever player, but he couldn’t resist one more season at Stamford Bridge two years later upon the return of Jose Mourinho.

Drogba ended that spell in equally glorious fashion, chaired off the pitch by his team-mates after winning a fourth Premier League title.

“Pogba signed for Juventus a long time ago as far as we’re aware.

[It] is disappointing. I don’t think he showed us any respect at all, to be honest.”

“I’m quite happy that if they carry on that way, they’re probably better doing it away from us.”

It’s a shame he wasn’t still in charge when United paid £89million to re-sign the midfielder, really.

Under Jurgen Klopp at Borussia Dortmund, Kagawa was part of the side which claimed back-to-back Bundesliga titles, including a league-and-cup double in 2012, leading to a move to Manchester United – coincidentally at the same time Pogba left Old Trafford.

The Japan international showed moments of promise for the Red Devils – including one of the calmest hat-tricks in Premier League history.

But he returned to Dortmund only two years later, adding another German Cup to his honours list.

Rush’s glorious Liverpool career was punctuated by an unhappy season at Juventus, but – sorry Ian – we’re so glad it was.

That campaign is fondly remembered for the striker suggesting that life in Italy was “like living in a foreign country”, although Rush himself insists it is an apocryphal tale.

He told FourFourTwo: “I didn’t actually say Italy was ‘like living in a foreign country’.

No one has ever seen a direct quote from me saying that.

“I’m blaming Kenny Dalglish. When he re-signed me, a reporter asked me, ‘Why have you come back?’ Kenny quipped, ‘He said it was like playing in a foreign country.’ He’s got a lot to answer for!

Tottenham have a strange penchant for re-signing their former strikers, and Harry Redknapp has a big part to play in that.

After scoring 64 goals in four years at White Hart Lane, Redknapp convinced Portsmouth to sign the striker he had first seen emerge under his watch at West Ham.

Defoe spent a year on the south coast before Redknapp, having now taken over at Spurs,

somehow twisted Daniel Levy’s arm into paying twice the amount they had received for the England international to re-sign him.

After joining Tottenham’s academy in 1995, Crouch would have to wait until 2009 before making a first-team appearance for the North Londoners.

Six years later, he rejoined Pompey, who by that point had just won the FA Cup, but yet again he only lasted a single season as Spurs came calling.

He came, he cried, he stole our hearts. Middlesbrough, and the rest of England, were heartbroken when Juninho left these shores following the club’s relegation in 1997.

But then he came back, on loan for a little while around the turn of the millennium, just to say hello and help Boro comfortably avoid the drop.

And then two years later he was back for good, a Middlesbrough icon, part of the side which won the club’s first trophy and qualified for Europe for the first time.

Returning to Boca Juniors after 11 years his initial departure was a true romantic homecoming for Tevez.

“My heart’s exploding with happiness! Thanks for braving the cold and waiting for me.

I’m already back home,” he wrote on Twitter after leaving Juventus to rejoin his boyhood club in 2015.

It would probably have been slightly more romantic if he hadn’t left after a season to move to the Chinese Super League for an astronomical salary in what he himself described as a “vacation”.

Still, he went back for a third go. In the words of Diego Maradona: “He filled Santa’s sack with dollars and now he has returned to Boca.”

The third stint was good, too, with Tevez helping the Xeneize to two more Argentinian titles.

Now spending his time preparing to save the world by producing sustainable alternatives to oil-based products with his company GF Biochemicals and having to deny reports he has €30billion in his bank account, Flamini also used to play for Arsenal.

The Frenchman made over 150 appearances in his first four years for the club,

earning a move to Milan when they were still pretty tasty, and returning in 2013 for another three years and almost 100 more appearances.

We like Joe Cole. In fact we love Joe Cole. But the end to Joe Cole’s career in England makes us quite sad.

After starting his career at West Ham as a child prodigy “full of fantasy”, Cole returned to Upton Park a decade later for an 18-month spell, by which point a serious knee injury suffered at Chelsea had taken the zip out of his game.

It’s a little known fact that Sheringham has been in his thirties since birth.

He was in his thirties when he won the Treble with Manchester United.

Matic’s first spell at Chelsea consisted of three first-team appearances and an obligatory loan to Vitesse before he moved to Benfica as part of the deal which saw David Luiz move to Stamford Bridge.

Three years later, he moved back to London in a £21million move.

Two league titles, an FA Cup and a £40million transfer to Manchester United suggest the Blues actually got some decent value out of the whole thing.

When it comes to Werder Bremen, Claudio Pizarro just can’t get enough.

The former Chelsea striker first played for Bremen in 1999 before returning to the club in 2008 and 2015.

And then, after a season at FC Köln, a 39-year-old Pizarro signed a one-year contract back at Bremen in July 2018 to “finish my career at the club I started in Europe with”, which he did.

Forget the Real Madrid stuff. Sure, he was good there, but think of him at Milan – the best player in Europe; no, the world; no, the universe.

What if he never had those four years at the Bernabeu in between his spells at San Siro? Would he have stayed like that forever?

After starting his career at Manchester United in the early ’80s, winning the FA Cup in 1985, Hughes spent two years on the continent with Barcelona and Bayern Munich.

Upon his return in 1988, the striker embarked on a decade of remarkable success, winning two titles, three more FA Cups, two League Cups and three European trophies for United and Chelsea.

Le Saux’s original spell as a youngster at Chelsea was not a particularly happy one, as the left-back struggled with the “bullying culture” at the club, at least until he met a kindred spirit in Pat Nevin.

“I can be myself and make it and still not be anywhere near Pat, who was wearing Issey Miyake full-length leather coats and probably a bit of eyeliner now and again because he was in his goth phase,” he told the Quickly Kevin, Will He Score? podcast.

After moving on to Blackburn, where he won the Premier League and broke into the England team,

Le Saux rejoined Chelsea four years later, winning a number of honours as the club evolved into a cosmopolitan side.

Another player who shone at Klopp’s Dortmund only to find life much harder elsewhere.

Gotze reached the pinnacle of the game in 2014 when he scored the winner in the World Cup final, but never truly established himself at Bayern Munich.

“I can understand many fans could not accept my decision,” he said,

reflecting on his move to Bayern upon his return to Dortmund in 2016. “I wouldn’t reach it today either.”

Fitness and health issues mean he never really recaptured the form that made him such a prodigious young talent and in 2020, he moved to PSV.

It’s easy to forget just how exciting Wright-Phillips was in his youth, winning Manchester City’s Young Player of the Year award for four consecutive seasons.

Breaking into the England team and earning a big-money move to Premier League champions Chelsea.

A Premier League title and FA Cup was won with the Blues, but he was never considered a star at the club, moving back up north three years later to witness first-hand the transformation of City.

Bloody Bayern, always nabbing Dortmund’s best players, even when they initially passed up the opportunity to have them.

Hummels made just two first-team appearances for Bayern in 2006-07 before going on to establish himself as one of the best defenders in the world at Dortmund.

Almost a decade later, the centre-back rejoined his former club in what is a fairly long line of kicks in the bollocks which BVB have suffered over the years.