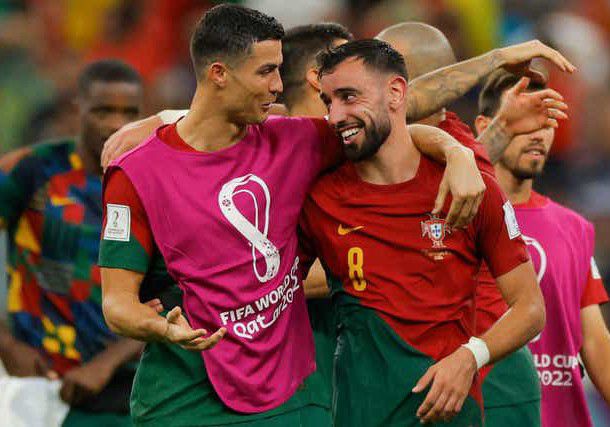 Portugal will welcome back their regular starting line-up to face Switzerland today after a poor showing from their reserves in their final World Cup group game.

Cristiano Ronaldo was one of the few who kept their places in the Portuguese side for their final group game, but was off the pitch by the time Heung-min Son inspired a South Korea comeback from 1-0 down, to win 2-1 and qualify in second place.

Six points from the group, however, was enough for Portugal to book a last-16 tie against Switzerland, who held off a spirited Serbia side in their final Group G match, winning 3-2 to finish second behind Brazil.

Santos looks set to reinstate his first-choice players such as Manchester United playmaker Bruno Fernandes, who has scored two goals and laid on two assists in this World Cup so far.

Manchester City pair Bernardo Silva and Ruben Dias should also return, with Santos’ main dilemma being who to play at left-back,

with Nuno Mendes ruled out of the tournament.

He could select another United player, in Diogo Dalot, and switch Joao Cancelo to the left, or go with the experienced Rafael Guerreiro of Borussia Dortmund.

Switzerland: Murat Yakin, Xherdan Shaqiri is now fit and firing after missing the Brazil defeat with a knock before scoring a fine goal on his return against Serbia.

Goalkeeper Yann Sommer and centre-back Nico Elvedi both missed the Serbia game due to illness, but could return at Lusail Stadium.