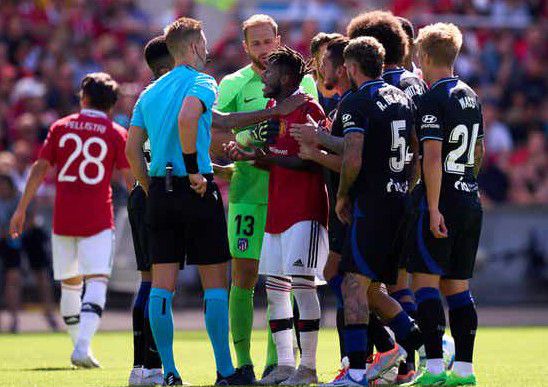 Manchester United fell to their first defeat of pre-season as Joao Felix’s late strike settled a battling friendly for Atletico Madrid in Oslo.

Fred was also sent off for a second yellow card in the final minutes, United’s second red card in five pre-season friendlies.

Erik ten Hag picked a strong starting line-up, though Jadon Sancho missed out through illness, in the strongest hint yet of what his team for next week’s Premier League opener against Brighton will be.

Anthony Martial and Marcus Rashford were lively up front, with the former unlucky not to add to his pre-season goal tally inside the opening minutes.

Atleti, who are a few weeks behind United in terms of pre-season preparations, took a while to grow into the game but the second half saw more of the battling display we have come to expect.

restricted Atleti to few chances, but Felix got away from Diogo Dalot with four minutes left to fire a fine shot inside David de Gea’s near post.