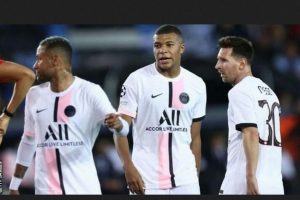 It was Lionel Messi’s first start for the club and as a result the first time.

The former Barcelona star had lined up alongside Kylian Mbappe and Neymar in the same front line.

The result? An underwhelming 1-1 draw at Club Brugge.

Dropping points against the expected weakest team in Group A,

is an inauspicious start for Mauricio Pochettino and his star-studded squad.

Eurosport France’s Vincent Bregevin answers some of the big talking points of the week.

What has been the overriding reaction in France to the draw with Brugge?

“The result has been met with huge disappointment, even more for the poor play than the poor result.

“Everybody expected fireworks with Neymar–Messi–Mbappe against a team considered as the weakest of the group.

But PSG never looked like a team, lacking balance, defensive work from the front line, fighting spirit and tactical answers.

Is Pochettino well-liked or could his job soon be under pressure?

“Pochettino is not under pressure just yet.

But, he has a lot to prove after failing to win the title last season.

And adding so many talented players to his squad during the transfer window.

“He must win everything.

“He has the board’s support and he won’t be judged after this game, as the team changed quite a lot this summer.

He needs time to work on it. He also had a great start in Ligue 1 this season.

“But still, the Champions League is the main goal for PSG.

Another bad result against Manchester City would complicate things for him.”

Michael Owen commented that ‘PSG are weaker with Messi’. Are there signs that Owen might be right, or is it too early to judge?

“Messi is a six-time Ballon d’Or and it was only his first start in a new team.

Saying PSG are weaker with him seems a bit premature.

“Still, Messi never defends and PSG already had that kind of problem with Neymar and Mbappe.

“Actually, Neymar was the biggest issue yesterday, not Messi – and I understand Owen‘s point.

But clearly, it’s way too early to judge his impact.”