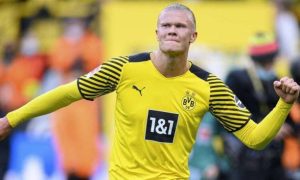 Erling Haaland’s agent Mino Raiola has given a huge hint that his client could favour a move to LaLiga when the time comes to leave Borussia Dortmund.

Haaland is on the target list of almost every big club across Europe after his scoring feats in recent seasons.

The 21-year-old is currently sidelined with a hip problem that will likely keep him out of action until Christmas.

The Norway forward still has 13 goals to his named this term, on the back of 41 goals in 41 games last season.

The prolific striker does have a €75m release clause in his contract which will come into effect in 2022.

That would mean that Borussia Dortmund would be powerless to keep the player if his buyout clause was met.

Raiola has been quiet surrounding the future of Haaland recently, but on Wednesday he spoke to Deportes Cuatro.

Asked whether Haaland would like to make a move to LaLiga, Raiola added:

“Haaland likes Spain, he really likes his home in Spain.

Afterwards, it is too early to say where he is going to play next year. It is not good either.”

That would make Real Madrid favourites to land Haaland, despite suggestions they are focused on Kylian Mbappe.

The financial impact of the Covid-19 pandemic would surely limit Los Blancos to one of either Haaland or Mbappe.

But with Raiola’s latest suggestion the Bernbaeu hierarchy may well be reconsidering their plans.

BVB offer new Haaland terms
As far as Premier League interest goes, Manchester City, Manchester United and Chelsea have all previously been interested in the player.

Chelsea were believed to be closest to landing the attacker last summer, but were put off by the huge agent’s fee and other add-ons in the prospective deal.

Haaland remains under contract with BVB until 2024 and the Bundesliga side are eager to extend that.