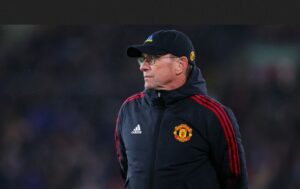 Man United interim coach Ralf Rangnick has stressed that Ole Gunnar Solskjaer will have to take some of the blame if the club fails to finish in the Premier League top four.

Ole was sacked from the Old Trafford dugout back in November,

after a run of five defeats in seven games left United seventh in the Premier League,

with Rangnick brought in in an attempt to guide the team back into the all-important Champions League places.

Manchester United are up to fifth but sit six points adrift of the top four and results are once again on a downward trend.

The Red Devils have given up leads in their last three games in all competitions and have just two wins from their last seven Premier League matches.

Rangnick has faced criticism over his experience as a manager.

Recently biting back at Paul Scholes‘ claims that he is a sporting director instead of a boss,

but the German insists he is not solely to blame for the club’s current state.

Rangnick on the possibility of United failing to qualify for the Champions League.

“It has always been a concern since Ole left the club.”

“That was one of the reasons why he probably had to leave the club.

And of course, results like [Saturday] don’t make things any easier.

“Against Villa, Burnley and [Southampton] we were 1-0 or 2-0 up and gave away two points.

This can happen once but it shouldn’t happen three times,

and with those points the situation would be different but it’s not. This is what we have to face.

“We have to realise the truth and it doesn’t make it any easier to finish fourth at the end.”

Rangnick has also confessed that he fears he will not have the time to address United‘s problems,

as he inherited the group from Solskjaer midway through the season, leaving him without a summer to prepare.

“To be honest I don’t know if we are fit enough to play that way because, as you said, I came in the middle of the season.

“We had no preseason and in essence we had in total two weeks in between where we could train in a normal way.”