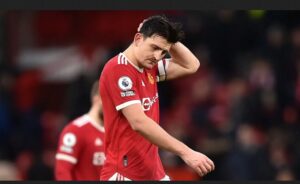 Ralf Rangnick reveals he has no plans to strip centre-back Harry Maguire of the captaincy despite some “weaker moments” of late.

Manchester United have been in subpar form having failed to secure victory in three winnable matches in a row in all competitions,

since beating West Ham before the international break.

They were knocked out of the FA Cup by Championship side Middlesbrough and held to consecutive 1-1 draws by Burnley and Southampton in the Premier League.

As has become the norm, Maguire‘s performances have drawn significant scrutiny from supporters and pundits alike.

The England international hasn’t covered himself in glory and was one of many Man Utd defenders who were made to look a bit silly in the build-up to Burnley’s equaliser last Tuesday in particular.

Although Rangnick acknowledges his skipper has endured some “weaker moments”, he sees no reason to take the captaincy away from Maguire.

“I think when he came back after his injury he did extremely well.

“In the past two games, yeah he had some weaker moments,

against Southampton and when we conceded the goal at Burnley, but he’s our captain and I don’t see any reason to change that.”

Maguire was named Man Utd captain just five months after his £80m move to Old Trafford from Leicester City in 2019,

and has already made 132 appearances for the club having been thrown in at the deep end.

Rangnick continued that he believes the 28-year-old’s form is a matter of adapting to a different playing style.

“He’s a player who has to develop, get better, like all the other players.”

“The way that we are playing now is new also to him because,

in the English national team he was used to playing in a back three and here at Manchester United,

in most cases a back four, but still not being as proactive, not with that kind of rest defence always being on the front foot when we are trying to defend.

“This is something also new to him and it will also take some time for him to get used to that, to get adjusted to that.”