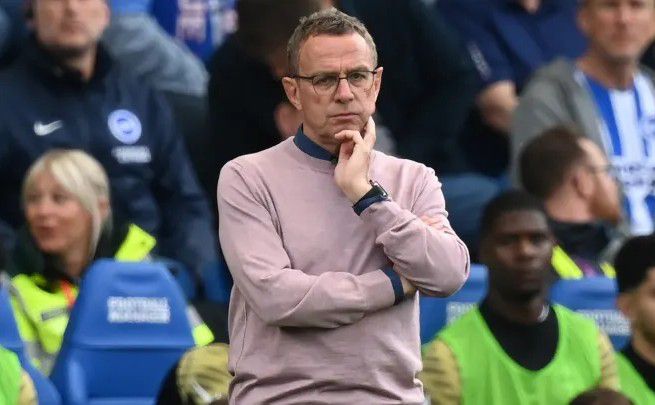 Ralf Rangnick has reiterated Man Utd’s need for a squad overhaul following the humbling 4-0 defeat to Brighton on Saturday – a result that means his side have failed to qualify for the Champions League.

United were completely dismantled by their mid-table opposition on the south coast, with three goals in 11 second-half minutes putting paid to their top four hopes.

The result also means the Red Devils are guaranteed to end the season with their lowest points tally in the Premier League era.

Interim manager Rangnick will be replaced in the Old Trafford dugout by Erik ten Hag in the summer before assuming a consultancy role,

and the Dutchman is widely expected to make wholesale changes to a disjointed squad in the summer.

Rangnick has previously discussed the need for several new arrivals at Man Utd,

and he reiterated that the club must sign several ‘top’ players if they want to be competitive again.

Speaking after the horror show at the Amex, the German said:

“I mean, in the end football is pretty easy; you just need to win games and in order to do that

it’s obvious with quite a few players whose contracts are expiring we need a number of new players.

“There is already at least something like a number of players that are really top players for this club but as I said we need all the other areas.

[I] suppose there will be six or eight new players.

They should be top players to strengthen the quality of the squad.