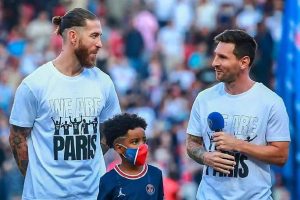 Sergio Ramos And Lionel Messi  both left Spanish football to join Paris Saint-Germain, but the former Real Madrid and Barcelona captains have not yet developed a close relationship in the dressing room.

While Messi has made a total of eight appearances for PSG.

Ramos is still yet to make his debut for the club after struggling with injuries since his arrival.

Although he did train with his teammates – those who are not on international duty – on Wednesday.

Ramos has made a good impression and has a great relationship with many of the players in the PSG dressing room.

According to L’Equipe, but when it comes to the Spaniard’s bond with Messi, it is just cordial.

It seems that Ramos and Messi are not great friends and it is thought that this is down to the fierce rivalry that the two have experienced in the last decade.

“You can’t erase 10 years of Clasicos just like that,” a source told L’Equipe when asked about the relationship between the two players.

Messi, meanwhile, has been particularly close with compatriots Angel Di Maria and Leandro Paredes, as well as Neymar.

The 8 Of Greatest Comebacks In Football History