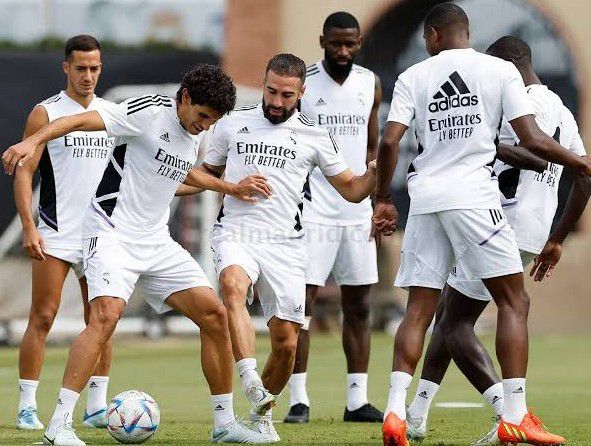 Carlo Ancelotti could leave his major summer signings on the bench as Real Madrid face Eintracht Frankfurt in the Uefa Super Cup.

Antonio Rudiger and Aurelien Tchouameni are competing for spots in the starting XI with the Spanish side’s stars who lifted both the LaLiga and Champions League trophies last season.

In fact, it would not be a surprise to see the Italian line up the exact same team that started against Liverpool in the Champions League final when Los Blancos step out in Finland on Wednesday night.

Eder Militao and David Alaba look set to once again be Real’s first-choice central defensive pairing, in front of Thibaut Courtois and flanked by the duo of Dani Carvajal and Ferland Mendy.

Luka Modric, Casemiro and Toni Kroos could start in midfield ahead of both Tchouameni and Eduardo Camavinga.

In attack, Karim Benzema will be Madrid’s go-to guy for goals in 2022-23 with Federico Valverde holding onto his position on the right flank, opposite Vinicius Jr.

That XI lined up both against Liverpool in Paris and in the 2-0 friendly win over Juventus in their final pre-Super Cup friendly – leaving the likes of Eden Hazard, Marco Asensio and Rodrygo benched.