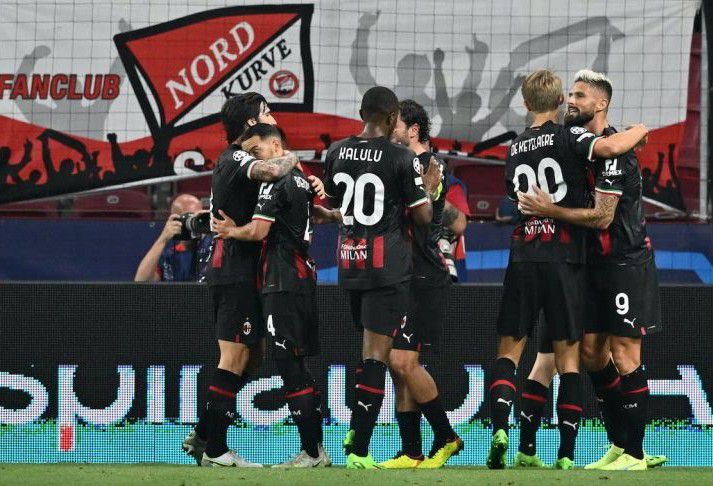 AC Milan were forced to come from behind in Austria as they opened their Champions League campaign with a 1-1 draw against RB Salzburg.

The seven-time European champions had Alexis Saelemaekers to thank for a thumping finish as they picked up a point, despite being largely wasteful in front of goal.

Rafael Leao was inches away from winning at the death, but the Milan winger’s stoppage-time strike was deflected off the post.

The opening exchanges were end-to-end, but both sides struggled with their final ball and therefore spurned numerous attacks from promising positions.

The only real chance fell to the visitors, as Olivier Giroud got around the back of the defence, only to shoot straight at the goalkeeper from a tight angle.

back line and passed to strike partner Noah Okafor, who nutmegged Pierre Kalulu before firing under Mike Maignan.

That advantage had been wiped out by half-time though, as Saelemaekers hammered into the back of the net from Rafael Leao’s pass.

Salzburg should have re-taken the lead straight after the break, but Fernando could not find the target when blazing over from close range after good build-up play involving Okafor and Maurits Kjaergaard.

That proved to be one of very few chances for Matthias Jaissle’s side, though, as they largely allowed their visitors to do the running.

Even with so much possession, AC Milan lacked a cutting edge.

Former Liverpool star Divock Origi came off the bench but was starved of service, with the Italians largely resorting to shooting from long distance, without troubling Philipp Kohn in goal.

In the end, the final big save came at the other end as Maignan pushed away a powerful drive from Nicolas Seiwald, who tried his luck from 30-yards.

WATCH THE VIDEO BELOW: