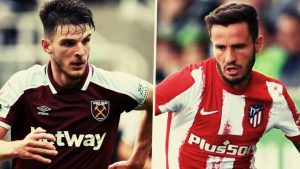 Rio Ferdinand is looking for Manchester United to bring in another midfielder before the summer transfer deadline, with the Red Devils legend claiming that Saul Niguez would be a “perfect fit” at Old Trafford while Declan Rice “would be a massive addition”.

There have been plenty of rumours regarding a move by Ole Gunnar Solskjaer to find another option to fill a holding role in his plans prior to the current window closing for business on August 31.

Raids could be launched for proven performers on the books at Atletico Madrid and West Ham, with Saul and Rice having generated enough speculation in the past to suggest that they have been registering on United’s recruitment radar for a while.

Read Also: Before Nations Cup Draw Today, See The Ranks All 24 Qualifiers For The Afcon

Red Devils legend Ferdinand hopes more money will be spent, telling his FIVE YouTube channel: “I think if the right player becomes available for the right price, Ole Gunnar Solskjaer will go and get him.

“In today’s game that’s a decent price for someone like him who has Champions League experience. I’m a big fan of his. If you can get him in this window, I think you do it.

“I think Declan Rice would be a massive addition to this squad. I’m a massive fan of his. I would love to see him keep progressing.

“He was brilliant for England in the summer. I think if West Ham keep him they’ve done unbelievably well. I think he does well staying at West Ham or if he goes.”

Productive business has already been completed by an ambitious Premier League outfit this summer.

Jadon Sancho has been prised away from Borussia Dortmund for £73m ($101m) at the end of a long-running saga, while World Cup-winning France international defender Raphael Varane has been acquired from Real Madrid for £40m ($55m).

Solskjaer has admitted that more business could be done over the coming days, after seeing his side open the new season with a 5-1 win over Leeds, with United forever in the market for players that will raise collective standards.

“You never know what’s going to happen in football.

“Any surprises, anything can happen, we have got to be ready. But I’m very happy with what we’ve done so far.”.