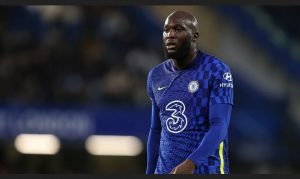 The Belgian forward  is expected to drop  from the matchday squad to face Liverpool on Sunday.

Without seeking permission from the club, Lukaku spoke to Italian media and admitted he was unhappy with his situation at Chelsea.

Something which disappointed both Tuchel and those in charge at Stamford Bridge.

While it is now accepted that Lukaku meant no harm with his comments.

Chelsea were less than impressed with his behaviour and failure to disclose the interview, and some fans have been left incensed by the whole thing.

As reported by a whole host of sources, including The Telegraph.

Tuchel is weighing up disciplinary action against Lukaku.

The Athletic now state that Tuchel has opted to drop Lukaku from Sunday’s matchday squad.

While he is also expected to have a strong word with the striker.

Lukaku has netted twice in his last two games but Tuchel now needs to figure out how to replace him.

Timo Werner trained with the squad in the build-up to this game but was struggling with Covid-19 for over two weeks before returning to training.

While Kai Havertz is yet to play a minute after overcoming the virus as well.

In the trio’s recent absence, it’s Christian Pulisic who was starting up top for Chelsea.

But the American looked an awkward fit and is without a goal in his last seven Premier League appearances.