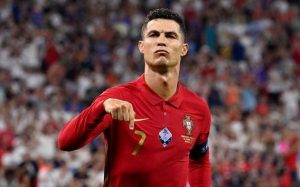 Former Juventus player who just returned  to Manchester United  in the summer transfer window, has made more history for his country.

Portugal’s opener in their World Cup qualifying clash with the Republic of Ireland.

Ronaldo showed off his fabled predatory instincts once again as he scored in the,

89th minute to tie the score at 1-1 at Estadio Algarve, making history in the process.

The 36-year-old had only scored once in his country’s opening three Group A matches,

but, has doubled his account with another finish, becoming the most prolific frontman to ever grace international football in the process.

Read Also: Jorginho Talks Of What Do Makes Him Angry.

• Harry Wilson Penalty Was Saved As Wales Held To A Goalless Friendly Draw Against Finland.

Ronaldo’s big moment came in the 89th minute, with the Portugal star already squandering a chance earlier in the game.

The newly-signed Manchester United star had a chance to seal the record from the spot,

in the first half, but was denied by 19-year-old goalkeeper Gavin Bazunu.

His big moment couldn’t be held off forever, though,

as Ronaldo scored on a Goncalo Guedes assist in the 89th minute.

And then, in the sixth minute of stoppage time, Ronaldo added a winner, sealing a 2-1 win for Portugal in the process.

All about the Record-breaking

in Portugal’s 2-2 draw against France in the Euro 2020 group stages earlier this summer,

and has now surpassed the Iran legend.

as the highest-scoring player in European Championship and World Cup competition (21) after netting that brace,

and recorded his 110th strike against the Republic of Ireland in his 180th game for his country.

Ronaldo is also the outright top scorer in Euros history on 14, and he is the only player to ever play and score in five consecutive appearances at the tournament.

Ronaldo’s staggering exploits in the final third for Portugal have helped cement,

his standing as one of the greatest players of his generation.

The five-time Ballon d’Or winner has also won two trophies with his country,

including Euro 2016, but his achievements at club level are arguably even more impressive.

and has yet to show any signs of slowing down despite advancing towards his late thirties.

At the end of today’s match, Cristiano Ronaldo shows  Age is just a numbers.