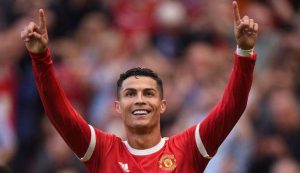 The Portuguese star big-money move to Manchester United has helped him go ahead Lionel Messi to become Forbes’ highest-earning footballer this year.

with $70m (£51.25m) of that coming from his salary and bonuses for his return to Old Trafford.

Meanwhile, Lionel Messi sits just behind him at $110m (£80.5m) with his new Paris Saint-Germain team-mates Neymar and Kylian Mbappe rounding out the top four.

Read Also: Lionel Messi Will Miss Metz Game With A Knock To His Left Knee

Ronaldo compare to other athletes?

With $55m (£40m) of his earnings coming from commercial deals,

Ronaldo is one of the highest-paid athletes in the world when it comes to sponsorship earnings.