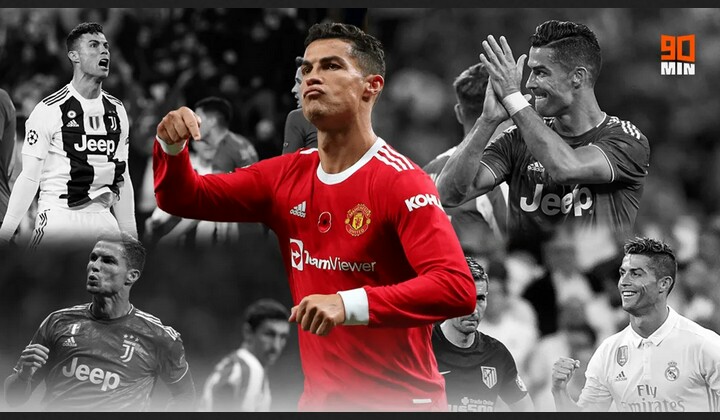 There remains a mutual respect between the pair, with the Argentine coach labelling Ronaldo as one of the world’s finest players on several occasions

– and insisting Atletico would have won the Champions League at least three times if not for the forward.

Here’s a quick rundown of every meeting between Ronaldo and Simeone as well as their complete head-to-head record.

In their first ever meeting, Ronaldo scored a hat-trick to put Simeone’s Atletico to the sword.

The Argentine had only been in the job for four months ahead of this clash, and would end his debut season as Atleti head coach with a Europa League title.

Ronaldo was again on the scoresheet in his second time up against Simeone as Real ran out 2-0 winners at the Santiago Bernabeu.

He would miss the return fixture later in the season, with Real prevailing 2-1 at the Vicente Calderon in his absence.

One of the most famous games in the recent history of Spanish football,

Ronaldo scored the opening goal of the 2013 Copa del Rey final before being sent off as Atletico won the cup after extra time at the home of their most bitter rivals.

Months after that Copa triumph, Atletico returned to the Bernabeu and picked up an important 1-0 win that would go some way to helping them win the 2013/14 La Liga title. Diego Costa scored the only goal that day.

Real Madrid went some way to avenging those Copa and La Liga defeats with a 3-0 thrashing of their rivals in the first leg of their semi-final.

Ronaldo played an important role though was not on the scoresheet that night.

But Ronaldo did manage to grab a brace from the penalty spot in the return leg to seal their place in the final, going on to beat Barcelona at the Mestalla.

The two sides played out an entertaining 2-2 draw in their third meeting in a month, with Ronaldo grabbing a late equaliser for Los Blancos.

Atletico missed the chance to win their first ever Champions League thanks to the late rally of Ronaldo and his Real teammates.

The opening game of both sides’ 2014/15 campaigns ended in a frantic 1-1 draw in the first leg of the Supercopa de Espana.

James Rodriguez gave the hosts a late lead on his debut, but Raul Garcia levelled the scoring minutes after.

Ronaldo‘s future Juventus teammate Mario Mandzukic scored the sole goal in the second leg later that week, with Atletico scooping the first trophy of the season.

Atletico‘s early-season triumphs over Real continued with a 2-1 victory at the Bernabeu in La Liga weeks after their Supercopa win.

And Ronaldo‘s strike in the second leg counted for very little as a brace from the returning Fernando Torres helped Simeone‘s side into the next round.

Tiago, Saul, Antoine Griezmann and Mandzukic all managed to get on the scoresheet on a memorable afternoon at the Vicente Calderon.

The spoils were shared between these two rivals in the first leg of their Champions League quarter-final.

And a very late strike from Javier Hernandez proved to be the tie’s only goal in the eighth and final meeting between Real and Atletico in the 2014/15 season.

Rafa Benitez’s Real Madrid were denied a win at the Vicente Calderon by a late goal from Luciano Vietto.

Karim Benzema had given Los Blancos a first-half lead before Griezmann missed from the penalty spot.

However, Griezmann‘s goal in the return fixture at the Bernabeu was the only one between the sides as Atletico effectively ended Real’s title hopes.

Real got their revenge in a repeat of the 2014 Champions League final with a penalty shootout win at San Siro.

Ramos put Zinedine Zidane’s men ahead, and Griezmann missed another penalty in this fixture just after the half-time break.

Yannick Carrasco scored a late equaliser in normal time and the match ended up going to penalties, with Ronaldo‘s spot kick proving to be the winner.

Ronaldo‘s hat-trick helped Real ease past Atletico in the first half of Real’s La Liga-winning campaign.

though it counted for very little in the grand scheme of things – Real walked to the title and Atleti were marooned in third.

It was all about Ronaldo as Real and Atletico met in the Champions League for a fourth successive season.

The Portugal superstar bagged an impressive treble as the holders took a giant leap towards becoming the first side to retain the trophy in its current format.

Atletico did give their city rivals quite the scare a week later, with early goals from Saul and Griezmann dragging them back into the contest.

But Isco‘s strike on the verge of half-time effectively killed the tie thanks to the away goal rule. Still, at least Atletico won the last ever derby at the Calderon.

Nearly a year to the day after Ronaldo ran rampant at the Calderon, there were no goals scored in the first derby at the Wanda Metropolitano.

Ronaldo was on the scoresheet in his last Madrid derby, though his second-half strike was quickly followed by an equaliser from Griezmann.

But you just can’t keep Simeone and Ronaldo apart, can you?

In Ronaldo‘s first season at Juventus, he was drawn to face Atletico in the last 16 of the Champions League.

But Ronaldo almost singlehandedly wrestled it back with a hat-trick at the Allianz Stadium to turn the tie on its head and dump Atletico out of the Champions League for a fifth time.

Atletico and Juventus were drawn together in the Champions League group stage the following season – because of course they were.

Blaise Matuidi and Juan Cuadrado had Juve on their way to a win on matchday one, but Atleti‘s late rally saw Stefan Savic and Hector Herrera earn them a point.

Paulo Dybala scored the only goal of the game in Turin.

The two have met a staggering 29 times in their careers, with Ronaldo winning 11 matches to Simeone‘s nine and nine draws between them.

Ronaldo will face Simeone’s Atletico for the first time as a Manchester United player in the last 16 of the 2021/22 Champions League.