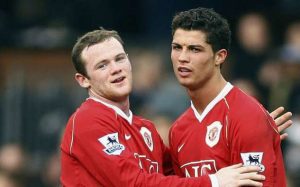 The Portuguese forward is currently not happy at Juventus, there are rumours of,

possible returning to England  in recent days, but his former team-mate can’t see him joining a rival

And, dash his Manchester United legacy, though recent reports suggest such a move is possible if not likely.

in the decade preceding City’s rise to the top of English football.

And as someone who knows Ronaldo well, Rooney “can’t see” the Juventus forward joining the rival organisation.

However, Ronaldo is said to be unhappy at Juventus and interested in a switch of scenery, and City are one of the few clubs who could afford to pay his wages.

What was said by Rooney?

“I think Cristiano has got a very good legacy at Manchester United and I know how proud he is as a player and a person,”

“I can’t see [him joining City], but it’s football so you never know.

There have been a few that have done it but no one at Cristiano’s level.

Obviously Peter Schmeichel and Andy Cole, but I just can’t see that as an option for him really.

“Financially of course he doesn’t need to do it. I think it’s more likely that it’s PSG he goes to.”

Rooney, now the head coach of Derby County, also emphasised that under no circumstances would he himself make a switch to City.

“I think you need to do what’s right for you as a person, for your family,” he said.

“Everyone knows I could never play for Liverpool or Manchester City. That’s obvious but everyone’s different.

“I think people move to clubs where they don’t really want to but from a financial point of view,

that might be the only option they have, so I might get it from some people’s point of view.

“But in terms of myself that just wouldn’t be an option.”

It’s been more than a decade since Ronaldo last donned the iconic red of United,

but many of their fans have nonetheless continued to cheer him on from afar, first at Real Madrid and then Juventus.

They watched him come of age at Old Trafford – a process that had seemingly ensured he would always be their golden boy.

Now, though, their emotions will be twisted by him potentially joining a top foe.

Ronaldo going to City would also mark a second seismic shift in the football world in less than a month.

After Lionel Messi left Barcelona for Paris Saint-Germain. A third dramatic transaction could then come if Kylian Mbappe forces a move to Real Madrid.