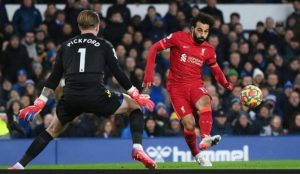 The German Liverpool coach Jurgen Klopp may well be biased, but he has had a front-row seat to witness the incredible form of forward Mohamed Salah – and the Egypt international could grab yet another record very soon.

If the 29-year-old scores or registers an assist in Thursday’s home game against 19th-placed Newcastle,

– a side he has never failed to score against at Anfield – then Salah will have equalled Jamie Vardy’s record of scoring or creating a goal in 15 consecutive Premier League matches.

But records are nothing new for the incredible Salah.

In October he became the first Liverpool man to score in nine successive games and the hat-trick against Manchester United.

In the following match left him as the highest-scoring African player in Premier League history, overtaking Didier Drogba’s mark of 104 goals.

These records can be added on to a whole heap of historical achievements in the red of Liverpool.

He is Liverpool’s all-time Champions League top goalscorer (33) and became the fastest foreign player to tally 100 goal involvements in the Premier League, to name just a few.

As of 15 December, he had scored eight more Premier League goals (23) than the next man on the list – Tottenham’s Harry Kane (15).

Only Liverpool team-mate Trent Alexander–Arnold (12) has more assists, but only just, by one.

If combine the goals and assists from Salah, no-one comes close in 2021.

While Salah is out on his own in 2021 goal contributions, he is still well short of the best calendar-year record in Premier League history.

That is held by Kane after an incredible 2017 in which he scored 39 goals for Tottenham and claimed seven assists for a total of 46 goal involvements in only 36 league games.

Manchester City’s Raheem Sterling became the 32nd player to reach 100 Premier League goals on Saturday and, of those 32, Salah has the fourth best goals-per-game ratio.

Alan Shearer is the all-time top goalscorer in Premier League history with 260 goals from 441 appearances, but Salah is already storming up the list and, from 174 matches, currently has 111 goals, the joint 22nd highest total.

It is a far cry from his start in English football as after 13 Premier League games at Chelsea between 2013 and 2015, he had only found the net twice before disappearing to Roma and Serie A.

But since Liverpool paid £34m to bring Salah back to English football in June 2017, he has shone brightly and helped the Reds win the Premier League, Champions League, Uefa Super Cup and Fifa World Club Cup.

It is a high bar, but this season could be his best yet for Jurgen Klopp’s side.

He already has 14 goals from 16 Premier League games, as well as another seven in six Champions League matches, including a number of magnificent goals.

But he also has nine Premier League assists in 2021-22, only one short of his best from any campaign, as he has responded to critics who have called him selfish in the past.

The records salah could  get in the rest of this season:

The main one is he could become Liverpool‘s all-time leading Premier League goalscorer.

Salah is joint 12th in the overall list of Premier League goals for one club.

His next goal will take him clear of Ryan Giggs, although the Egyptian still has a long way to go to get to Sergio Aguero’s 184 goals that he managed at Manchester City.

Salah is tied 22nd overall in the number of Premier League goals and it surely will not be long before he forces his way into the top 20.