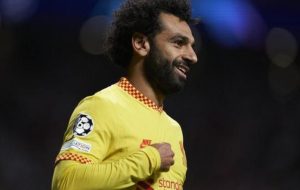 Egypt King Mohamed Salah reveals he wants to spend the rest of his career with Liverpool.

Mohamed Salah current Liverpool deal runs out at the end of next season.

“It doesn’t depend on me, but if you asked me I would love to stay until the last day of my football [career]. It’s not in my hands, it depends on what the club wants.”

“At the moment I can’t see myself ever playing against Liverpool.

It’s hard, I don’t want to talk about it, but it would make me really sad.”

Salah started his career with Al Mokawloon in his homeland and had spells at Basel,Chelsea,Fiorentina and Roma before joining the Reds.

Liverpool go to ManchesterUnited in the Premier League on Sunday with Salah looking to score in a 10th consecutive game.