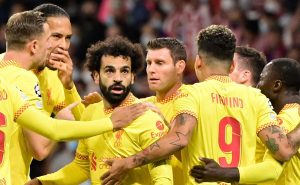 The Egypt International  has added a new record to his collection of Liverpool honours.

As he becoming the first player to score in nine consecutive matches in the club’s history.

It comes as the striker continues to discover arguably the richest form of his career.

With the forward a standout performer at Anfield across the start of the 2021-22 campaign.

Salah’s latest finish – which takes his tally to 11 across all competitions over the season so far.

Furthers a run that dates all the way back to late August, when he converted a penalty in a 1-1 draw with Chelsea in the Premier League.

Since then, he has found the back of the net on each subsequent appearance,

The only game Liverpool have played in the period where has not scored was their,

Carabao Cup clash with Norwich – and only because he was not in the squad.

9 – Mohamed Salah has become the first player in @LFC history to score in nine consecutive matches for the club. Inevitable.