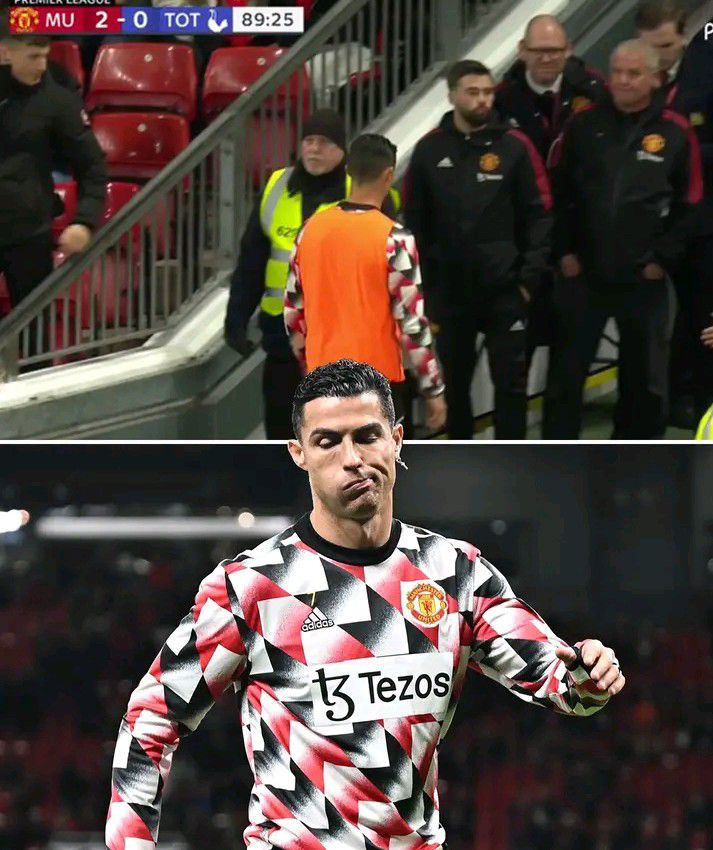 Cristiano Ronaldo left stadium during Manchester United Tottenham clash in which the acts has generate many criticizing.

Erik ten Hag side won by 2-0 at Old Trafford goals from Fred and Bruno Fernandes.

Ronaldo was dropped to the bench for the game, the only change from United’s last game

with Newcastle, a decision that paid off with the Red Devils’ fluid attack overwhelming Spurs.

It is not the first time that Erik ten Hag as benched the star forward however and just before the clock hit 90 minutes,

Ronaldo could hold his frustration in no more as stormed off down the tunnel, even though there was still a chance that he could be subbed on.

Ten Hag has said he will deal with Ronaldo tomorrow, but many pundits watching the game where left furious with Portugal international.

Former Premier League defender Danny Mills was one of them, telling Sky Sports:

‘It’s a little bit of a selfish act to go, “oh actually I’m not involved”, he knows full well that everybody’s going to see it.

‘You know what it’s like at Old Trafford, you’ve got to walk all the way down the touchline,

not just sneaking down at the halfway line. He knows everyone’s going to watch him.

‘And I feel sorry for United now, and Ten Hag because that’s an outstanding result against a top side and all it’s going to be about is Ronaldo.

‘It’s an absolute disgrace, I think it’s incredibly disrespectful to the team, to the manager, to the fans.

‘They were winning 2-0, what complaint can he have? If they were losing 2-0 it still wouldn’t be right,

but I would sort of understand it. He clearly thinks he’s bigger than the football club.’

Over the summer, Ronaldo failed in his attempts to leave United but speculation over a January exit will only grow following this latest public outburst..

Man United focus now is another big match against Potter side Chelsea.