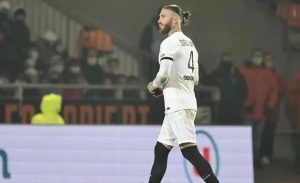 PSG supporters have been waiting for Sergio Ramos to kickstart his career with the club, yet the veteran defender hasn’t started well.

With injury keeping him on the sidelines for much of the campaign, fans had been eagerly anticipating see him actually get onto the pitch.

However, in just his second game in Ligue 1, Ramos was shown a late red card for two cautions in a matter of four minutes, as the team slipped to a 1-1 draw against Lorient.

After being brought onto the pitch at half time, Ramos didn’t have his most memorable of nights and suffered what was his 27th dismissal of his professional career.

He has had 20 of these in LaLiga Santander, five in the Champions League, one in the Supercopa de Espana and now one in Ligue 1 as well.

So far, he has played just 130 minutes in Ligue 1, plus 45 more minutes in the Coupe de France.