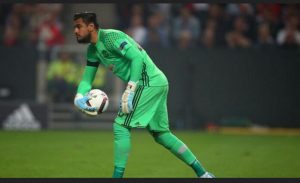 The Argentina Interbational Romero, 34, has been a free agent since his departure from Old Trafford in July, where he spent six seasons as understudy to David de Gea.

Sergio Romero last appeared for United in their Europa League quarter-final against Copenhagen in August 2020, which they won 1-0.

He is Argentina‘s all-time most capped goalkeeper with 96 caps.

Romero – who helped United win the Europa League in 2017 – had been out of favour as second choice under Ole Gunnar Solskjaer.

Dean Henderson was preferred after he returned from a loan spell at Sheffield United in 2020.

Romero, who also won the FA Cup and EFL Cup with United, kept 39 clean sheets in 61 appearances for the club.

Venezia sit 17th in Serie A with five points from seven games.