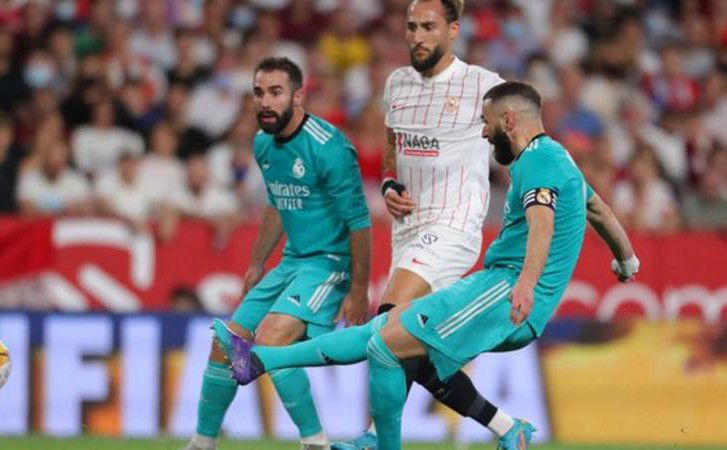 Karim Benzema scored a late winner as Real Madrid fought back from two goals down to beat Sevilla and close in on the La Liga title.

The hosts stunned Real in the first half through Ivan Rakitic’s free-kick and Erik Lamela’s close-range strike.

The visitors pulled one back early in the second half through Rodrygo before substitute Nacho drove in an equaliser late on.

Benzema then completed the remarkable turnaround in stoppage time.

The striker squeezed a shot past Bono from a cut-back to make sure the visitors took a huge win that moves them 15 points clear at the top of the table with six games remaining.

The goal continued Benzema’s excellent form this season and added to his recent match-winning heroics.

The France international scored a hat-trick against Chelsea in the first leg of the Champions League quarter-final before his goal in the second leg last week sealed an aggregate 5-4 win.

Sevilla, who would have gone second with a win and cut the gap at the top to nine points, remain third, level on 60 points with second-placed Barcelona and Atletico Madrid in fourth.

Barcelona have two games in hand on Real but it would still take an incredible collapse from Carlo Ancelotti’s side to be caught in the closing stages.