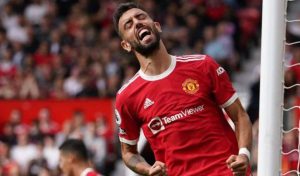 Manchesrer United Mamager Ole Gunnar Solskjaer confirmed  fans’ fears over Bruno Fernandes’ availability to face Liverpool on Sunday, and admitted the Portuguese might not be the only player missing.

The red devil’s host Liverpool on Sunday in the Premier League’s showpiece fixture.

Fresh off their epic comeback victory against Atalanta, spirits at Old Trafford will be sky high.

However, the bruising contest with the Serie A side has left a mark on several of Solskjaer’s stars.

Speaking in his pre-match press conference (via the Manchester Evening News),

Solskjaer admitted he might be “two or three” players short.

“It was a great effort and great atmosphere towards the end, another one of the great Champions League nights at Old Trafford,”

“A great comeback, which will bring some knocks and bruises, which normally you will expect.

It’s still Friday, the game’s on Sunday, we’ll give everyone time.

“We might have the whole squad back fit, we might be two or three players down, today we didn’t have everyone. Let’s see Sunday.”

Fred and Marcus Rashford could be two of the players in question. The pair both limped out of the contest midweek.

And when asked to clarify Fernandes’ availability after a report from the Sun suggested he was a doubt,

Solskjaer admitted the playmaker’s availability is also up in the air.

“Games like Wednesday night are always going to bring knocks and bruises and we do have two or three carrying knocks from that game.

“I’ll give everyone time, I hope I can pick from a fully fit squad, I might be without two or three.

Bruno might be a doubt but he’s doing everything he can to be ready.”